Raising the Heat: Why Pets and Hot Cars Don’t Mix

Raising the Heat: Why Pets and Hot Cars Don’t Mix 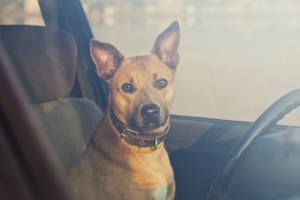 “It’s just five minutes.” “It’s not that hot today.” “But I cracked a window.” If you’ve heard (or used) any statements like these to explain leaving a dog inside a locked car, we encourage you to reconsider.

That’s because it takes just 10 minutes for the temperature inside a locked car to raise almost 20 degrees – regardless of what the temperature is outside. What does that mean for your dog?

On a warmer 85 F degree day, 10 minutes will raise the temperature inside a car all the way up to 104 F, according to the American Veterinary Medical Association.

Think cracking a window will make a difference? Not at all. Researchers have shown a slightly open window has almost no impact on the rising temperature inside a car. Once the doors are closed, and regardless of whether the car is parked in the sun or shade, the danger is there.

Why You Should Worry About Heatstroke

Your pet’s body needs to reach a temperature of only 109F to suffer from heatstroke. Considering the temperature inside a locked car can rise to that in just a question of minutes, the dangers are very real.

Heatstroke’s early signs include heavy panting, increased heartbeat, staggering, and collapse. Without immediate attention, pets might suffer unconsciousness and seizures because of brain swelling. Heatstroke can cause irreversible damage to the kidneys in a matter of minutes. Without emergency treatment, heatstroke is fatal.

Even if you rush your pet to the emergency room, treatment is not always effective. Lowering your pet’s body temperature is not only difficult but might be risky. Plus, pets that are older, sick or very young might have a harder time bouncing back from heatstroke.

What About Somebody Else’s Pets in Hot Cars?

Up until very recently, you had little recourse if you saw pets in hot cars. Even animal rescue and emergency responders could not take action to rescue a dog from inside a locked car because it would mean destroying personal property (a car’s window, for example).

However, that might be changing very soon, in part thanks to an initiative in North Carolina, where the House of Representatives recently passed a bill allowing emergency and rescue personnel to take action if they see in dog in danger – and that includes dogs left inside cars.

The bill — which still needs to be approved by the Senate before it can become legislation – would mean a huge step forward for animal lovers everywhere. In cities where such bills don’t exist, law enforcement and rescue personnel must make the choice to either search for the owner (while the dog remains inside the car) or get into trouble by breaking a window (which could expose them to liability and could even cost them their job)

So what can you do? If you see a dog locked inside a car, call Animal Control immediately. Don’t leave the scene and do as much as you can to locate the owner. Write down the details about the car, including the license plate. In many places, owners could be liable for fines for leaving their pets inside a car.